Home › Blog › How going electric could revolutionise your ride

How going electric could revolutionise your ride

Ebikes could help tackle congestion and make your daily commute cheaper and less stressful, and yet, if you are reading this, the chances are you are one of the 75% of people who don’t know what one is. But you probably will soon.

An ebike (also known as a pedelec) is a bicycle with a battery and electric motor that assists when you’re pedalling – up to 15.5mph in the UK. You still get the benefits of pedalling, but your speed gets a boost.

While the Netherlands, Germany, Denmark, Belgium and France have long embraced them – almost 30% of all new cycles sold in Holland are pedelecs – the UK lags behind. But this is changing: ebike sales rose from 5% of the UK bike market in 2015 to 12% in 2016. Halfords dubbed 2017 the “year of the ebike” after a 220% sales increase. Even Olympic gold medallists Chris Hoy and Victoria Pendleton are ebike converts, with Pendleton calling them a “game-changer” for their potential to get more people cycling. 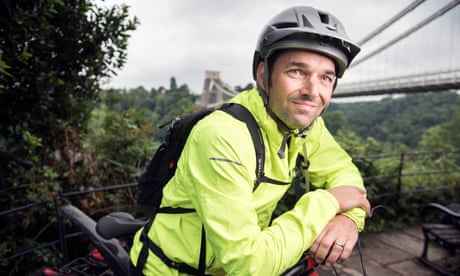 Power through your work commute on an electric bike

As the Bicycle Association’s operations director, Steve Garidis, puts it: “It’s quite difficult to explain what [an ebike] feels like: you’re still cycling but it’s like being an Olympic athlete; you can go faster and longer; hills are less effort. The acceleration is quite fun, even for the most sceptical grown up.”

Ebikes can help older or less fit people cycle, or make a long commute manageable. A 2017 poll by charity Wheels for Wellbeing found 18% of disabled cyclists owned a bike with e-assist, helping handcycle users accelerate away from traffic lights, or people with fatigue or pain keep cycling.

“E bikes level the playing field,” says Garidis. “People of different abilities and fitness can cycle together. People can cycle with their enthusiast partners; grandparents can go out with their families because e bikes close that gap.”

Paul Kenchington of the Bicycle Chain, who has sold a “trickle” of e bikes for 20 years in south-west England, says the realisation of their benefits and improvements in quality have boosted ebikes’ appeal, and finally gained them acceptance in UK bike shops.

“People have this perception it’s cheating, but ebikes are starting to become popular among mountain bikers who are reaching 40 or above and want to cycle in the Alps.”

A recent survey of 2,000 commuters commissioned by Evans Cycles estimated that by switching from car, bus, tube or train to ebikes, commuters could save an average of £7,791 over five years. Kenchington says: “There’s talk of peak car; car companies are looking at how they can maintain sales. One way might be people driving part way and keeping an ebike in the boot.” He wants to see super-pedelecs, which can travel at 25mph, legalised in the UK to increase their convenient commuting range. 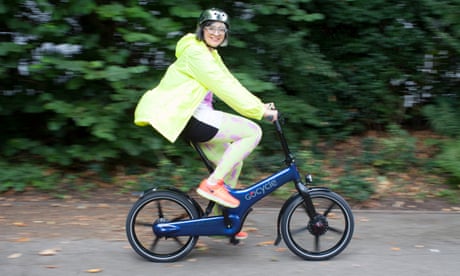 Why I’m proud to ride an e-bike

Paul Stewart, of UK cycle distributor Moore Large, says: “If you look at our cities and the way that we commute the ebike gives you the opportunity to get around at a reasonable pace – you don’t need to get all hot and sweaty, you don’t need to pay [car] tax or have a driving licence, because they’re classed as bikes.

“However, people that buy ebikes tend to be older; their cycling skills may not be the best. When you haven’t been out on a bike for a long time, you might not want to go out and fight with traffic.

“In Holland, Denmark, and Germany the investment in cycling infrastructure is 10% of the transport budget. Here it is less than 1%; that is the difference, really.”

Garidis adds: “When the government thinks about electric vehicles it thinks cars. They cost an enormous amount of money, they don’t solve congestion problems, and they need a huge amount of infrastructure for charging, whereas ebikes don’t: they just require a three pin socket.”

Courtesy of The Guardian